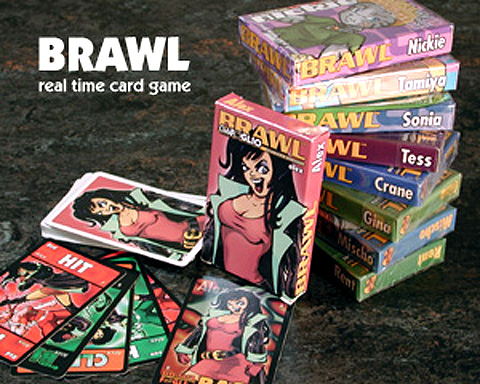 
BRAWL is a real-time card game that actually plays faster than a video game. That's a bold statement, but true. An average game of BRAWL takes less than 35 seconds.

The Basic Game: Each fighter chooses a deck from the ever-growing BRAWL universe. They shuffle the deck, leaving their "Freeze" cards on the bottom. Simultaneously, they start playing as fast as they can into the middle of the table, following simple layout rules. When one player reaches her Freeze cards, the game is finished. This happens pretty quickly!

BRAWL is not just fast, it's also strategic. But considering how little time you have to play your cards, you will need to practice to learn the tricks your deck can perform, and how to protect it from every different opponent.

BRAWL really is as fast as they say. Frankly I can't even think that fast but it is exciting. This game reminds me a lot of Spit, a card game I played with my girlfriends in Junior High. Each BRAWL deck represents one character. There are lots of girl decks. The characters have different styles so you have to get to know the deck very well in order to play to win. I enjoyed playing the game slowly in the beginning to learn it, but once the speed picks up I get frustrated. Just like I felt about Spit when I was a kid. Still, for those of you out there with quick reflexes, it's a load of fun.